"...a mile marker between where Adele had been and where she is now." 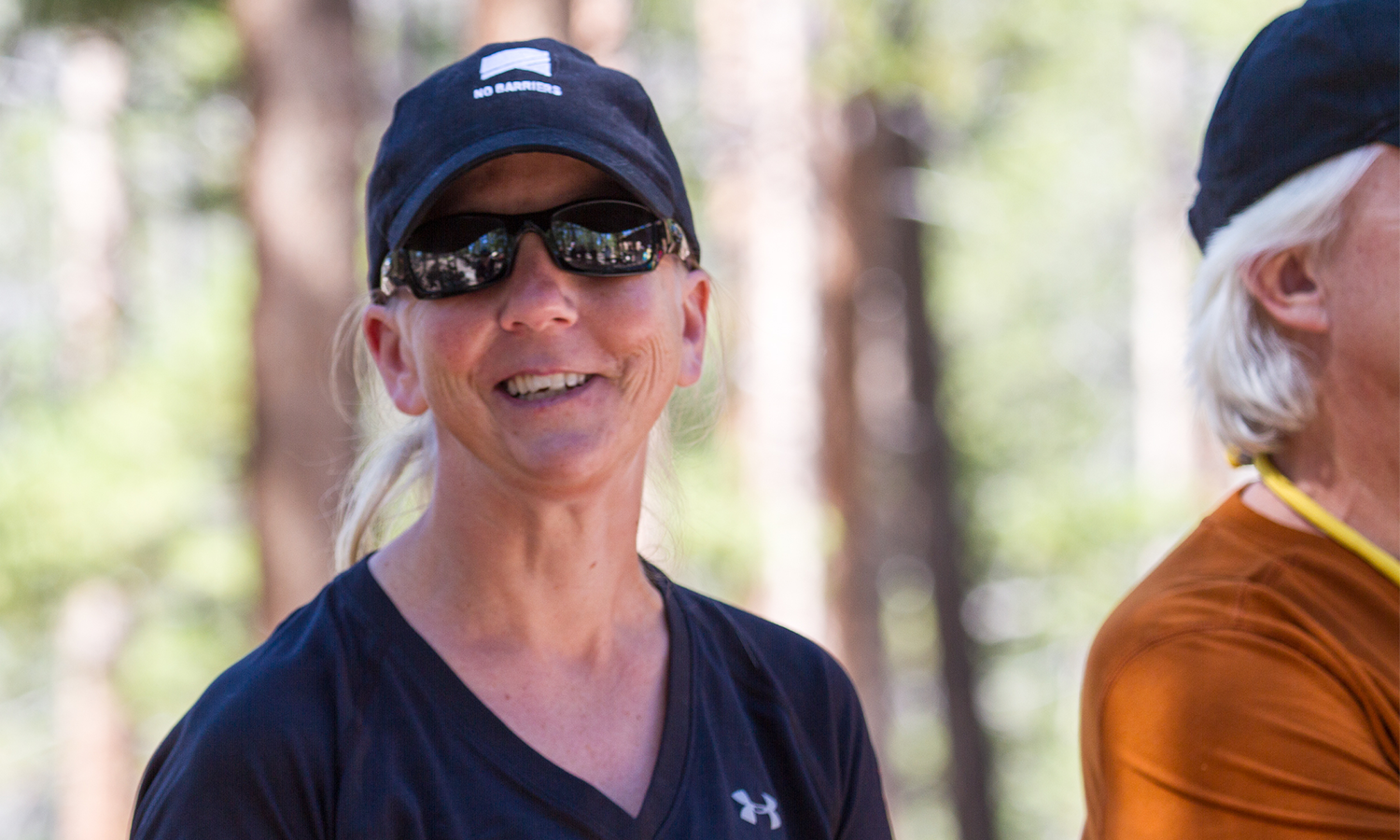 On May 17th, 2014, after an 0600 shuttle ride through winding mountain roads, a short hike to a small clearing of undisturbed snow, and then an afternoon of grueling exercises which included sliding down an ice patch and learning the correct technique for pivoting one’s hips and spearing a climber’s axe into rock and ice to avoid falling, retired Master Sergeant and Purple Heart recipient Adele Loar stood blindfolded atop Saint Mary’s Glacier, near Idaho Springs, Colorado.

This was the first day of the first training mission for the 2014 Soldiers to Summits program. As the expedition leader, Jeff Evans, affixed climbing rope around Adele’s waist, tying her to three other veterans she’d just met, Jeff explained the objective. With blindfold in place, Adele was to make it to the top of the icy route.

Goosebumps appeared on her forearms, but not from the cold.

Last summer, Adele quit her job as a Counterintelligence Surveillance instructor and moved into her old family home. She quickly became bound to the renovation of this house, and when she finally applied for the Soldiers to Summits program in March, she’d convinced herself the decision was simply the manifestation of a need for adventure; something to counterpoint the hours spent arranging furniture, painting walls, and refinishing cabinets.

Jeff handed a black cloth to Adele. Her teeth began to chatter. A few veterans from another team laughed. To them, being blindfolded was funny.

Adele squeezed both hands into fists because to her, this wasn’t funny. Being asked to trust three men she barely knew, two of them forbidden to speak, to guide her safely to the top of a slippery route, was not some “kumbaya,” team-building exercise.

Just eight years ago, Adele and four other passengers were riding in an armored SUV on a busy Iraqi road, when an EFP, a high-velocity IED, pierced the protective plating, exploded, and sent them crashing through a steel barrier and down a forty-foot drop to the highway below, leaving Adele temporarily blinded and without her right eye and part of her right shoulder. Two of the passengers, one a close friend of Adele’s, were killed.

“It’s okay,” her teammate said, wrapping the cloth gently over her eyes.

When the blindfold was in place, knotted twice and pulling uncomfortably at her hair, there was a freighting familiarity rising from her stomach into her chest. Everything was suddenly tinted with an unnerving vibrancy — the deep crunch of crampons, the uncooperative shaking of her hands.

She took a few strained breaths and was all too aware that she hadn’t yet acclimatized to the 7,000-foot elevation difference from Rhode Island, where she’d been only two days previous.

She imagined ripping the blindfold from her face, detaching the rope, trekking back down to the van.

In truth, Adele’s decision to apply to S2S wasn’t as clean or uncomplicated as needing to occupy time. During the year, while working on her house, she’d registered and trained for three marathons she would, in the end, choose not to run. When asked why, she had no clear answer.

This is what she contemplated, standing in the snow, blindfolded and out of breath.

But after a moment, she decided she was going to do this. If S2S could somehow guide her to the answers she’d been seeking for several years, she would let it happen.

For the next fifteen minutes, with excellent instruction from her team leader, Adele carefully traversed the icy path, leaped over a ditch, and then removed her blindfold to bright, white clouds at the top of the route.

The next day they were given five hours to complete a difficult hike to the summit of Saint James Peak. Along the way she was given high-fives by the other veterans. She was told she was strong. It felt like, for the first time in a long time, she no longer had to be apologetic about her shortcomings. She was amongst a group of like-minded people she didn’t have to explain herself to.

At just four hours, Adele summited the peak with Jeff, and the more athletic veterans who had waited for her. At the top, looking down at the jagged peaks below while arm-in-arm with her team, she felt more than accomplished.

The morning her vehicle was hit by an EFP, she had handpicked her partner Dan to accompany her. For the last eight years, it’s been hard to not elucidate this action as hand-picking him to die.

This first Soldiers to Summits mission felt like that initial step in the right direction, a mile marker between where Adele had been and where she is now. The program is not only an experience, a supportive community, or a clear objective. For Adele, it is a marathon starter pistol, fired into the air, urging her to move forward.