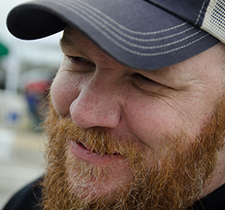 David, husband and father to three, is a medically retired Army Infantry Officer. The day he was injured, he was serving with an agricultural development team in the Ghazni province in eastern Afghanistan.  His mission was to scout an area and identify why some of the cooperatives had stopped working with the agricultural team.  While returning home from the mission, his mine resistant ambush protected (MRAP) vehicle was hit by an IED.  The damage from the explosion caused severe damage to his foot and ankle.  David’s right foot had to be amputated at the ankle.

With the aid of a prosthesis, David has learned to walk and run.  His mental and emotional healing is an ongoing process and hopes the Soldiers to Summits program can help in some way with that.