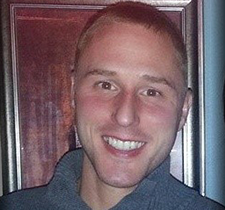 During his second deployment to Iraq, Keith was wounded in an IED blast leaving him with extensive injuries to his right leg, as well as mild traumatic brain injury. Despite his wounds, this Purple Heart recipient has persevered and has since competed in various running events, including full marathons.  With his passion for physical fitness, he hopes to one day own and operate a gym.

Keith’s tremendous determination also extends to his academics.  Upon returning home, he completed his Bachelor’s degree in Criminology from the University of Nebraska.